A Return to Glory

A longtime regional economic powerhouse that sat abandoned for years, the old Avondale Shipyard is experiencing a revival upon its recent purchase and rebrand as Avondale Marine, LLC

Located at mile marker 108 along the Mississippi River, Avondale Shipyard was once more than just the largest employer in the state of Louisiana during its 20th century heyday, more than a vital hub for local, domestic, and international maritime trade, and more than a key pinpoint for the greater security of the nation.

No, bustling Avondale Shipyard also stood as functioning symbol of civic pride – that for all the glittery panache outsiders attach to South Louisiana, this was still a place rooted in hard work, fueled by people who took pride in doing whatever it took, as long as it took, to get the job done right.

That’s why when Avondale closed in 2013, local officials painstakingly worked with principals in the private sector and leaders at the State and Federal level to once again breathe life into the long-time industrial site. It took years, but that persistence finally paid off in October 2018, when Virginia-based terminal operator T. Parker Host and Illinois-based Hilco Redevelopment Partners finalized the purchase of the riverfront property and formally announced their new joint venture – Avondale Marine, LLC.

When you’re examining the Avondale site, the first thing that stands out that makes it attractive is that it’s in a prime location,” said Jeff Keever, the government affairs representative at T. Parker Host. “We’re talking right outside New Orleans, situated on one of the busiest and most important waterways in the world when it comes to commerce – the Mississippi River. When you have a site with expansive acreage, like the Avondale site, and considering that this is a global gateway with all the vessels that enter and leave through the river, there’s always going to be a demand to utilize this space and we viewed it as a unique opportunity.”

Immediately, leaders at T. Parker Host devised and implemented a plan to transform Avondale from a distressed industrial asset that sat empty for many years into a “second act” site capable of serving the modern-day needs of importers and exporters. In less than two years, engineers and construction crews made improvements to existing infrastructure, and acquired new equipment — including three ship-to-shore cranes — and built new facilities in order to meet future client needs. 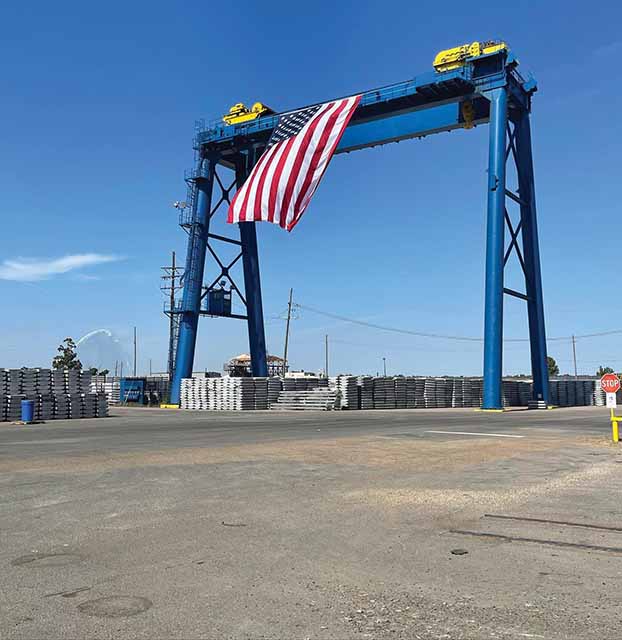 “When we acquired Avondale, we knew it had to be river, road, and rail – a true intermodal hub for international trade,” Keever said. “With our background as a firm, we understood the modern-day logistical demands of clients and immediately went to work ensuring that Avondale could take full advantage of its prime location with access to international trade routes, the domestic inland waterway system, domestic rail, and the major highways for trucks. The number of ways there are to move your product throughout North America from Avondale
is unparalleled.”

More than a dozen “legacy buildings” are still standing throughout the 254-acre Avondale footprint, meaning future manufacturing tenants could use or remodel existing infrastructure to fit their specific needs, as opposed to spending additional time and money constructing from scratch. Avondale Marine will continue redeveloping the site’s dock and terminal structures and plans to make operations up to 90 percent greener than the previous Avondale Shipyard by using a variety of power sources, including solar energy and electricity.

Despite dealing with the effects of an unprecedented global pandemic, Avondale has seen growth year-to-year since reopening. In 2020, Avondale handled a half-million tons of cargo. This year, Keever expects that total to exceed 1 million tons of cargo. And it’s projected that Avondale Marine will be the home of 2,000 new jobs within the next five years, equating to $36 billion in total economic impact and a $6.1 billion increase in Louisiana payroll.

In addition to operation with a cooperative endeavor agreement with the Port of New Orleans, T. Parker Host officials continue to work with local advocates when it comes to recruiting prospective manufacturing tenants to Avondale — showing the site, informing prospects of state incentives, answering how they can address their workforce needs, recruiting key operations employees and integrating them into the greater New Orleans and southern Louisiana community.

“To go from non-operational to welcoming our first ship in the span of 15 months was a monumental task. And none of this would have been possible without the full support from the leadership of the parish,” Keever said. “We’ve been very fortunate that JEDCO, GNO Inc., and the Jefferson Chamber of Commerce shared our belief of what Avondale could be again, and their role in this whole process has helped Avondale get to where it is today.”