A pork festival with a lean operation

How Hogs for the Cause CEO Becker Hall and COO Rene Louapre keep their festival smokin.’

If you make it to Hogs for the Cause this year, you might spot two “dirty, disgusting individuals hauling trash cans through the yard.” If so, there’s a good chance they will be Becker Hall and Rene Louapre, the team behind the annual barbecue competition that takes over City Park’s festival grounds each spring.

The event began back in 2008, with a whole hog cookout at the Fly in Audubon Park to benefit Ben Sarrat Jr., a 4-year-old who was battling brain cancer. Hall and Louapre were so moved by the cause and the enthusiasm of the attendees that they continued the tradition. Since then, Hogs for the Cause has evolved into a full-fledged festival, with a live-music lineup that rivals events of its size across the country, barbecue prepared lovingly by more than 90 teams of professional chefs and backyard pitmasters, and 30,000 attendees who soak it all in.

Despite the rapid growth of the festival, however, the machine behind it remains small — just Hall and Louapre, along with CFO Zandy Rainold and a small group of volunteers. That means a tremendous amount of work all year long to put on an event that in 2015 raised more than half a million dollars for families of children with brain cancer.

Hall and Louapre share what Hogs means for them, and how their lean operation manages to produce such outsized results.

“We’re the most frugal spenders for a festival we can possibly be, and that’s allowed us to be successful without that production backing.” – Becker Hall

Biz: This event has evolved into an impressive fundraising engine. What is your goal for this year?

Louapre: We always have a bunch of different goals. From my point of view, the money is just one thing. What we really want to focus on year in and year out is operationalizing the event to a better capacity so we can be better for our teams and patrons. How can we attract more sponsors? How can we give everyone a great festival experience?

Hall: On the fundraising side, I think last year we raised close to $505,000 dollars in hard money, and the largest team actually raised $135,000 of those dollars. My top line revenue number is what our operating revenue is. We’re always trying to make the event not only as efficient as possible for the customer and keep that price as low as possible, but to keep our operating budget as low as possible, too, because we don’t have the benefit of an AEG or a Live Nation backing us.

Biz: How do you manage overhead to maximize your charitable impact?

Louapre: Lots of text fights about whether we really need this or can we cut back on that.

Hall: I always say, ‘We don’t need it. Convince me why we do.’ And we’re not egregious in our spending at all. We’re the most frugal spenders for a festival we can possibly be, and that’s allowed us to be successful without that production backing.

Louapre: I think one othe ways we have been able — and it’s almost by accident — to control a lot of our expenses is with our bands. The festival band market is so hyper-inflated that we focus on more up-and-coming acts.

Hall: We have a certain amount to spend on each time slot. We wouldn’t be able to donate as much money as we do if we wanted to compete with the big festivals. The problem with the festival economy right now is that there are so many festivals – and I personally think it’s a bit of a bubble – and that’s creating so much demand for bands. They’re getting top dollar to come out and play. So it’s very hard to compete as a smaller festival without the balance sheet backing of the bigger ones to get those bands, but we are very aggressive, and we show the bands an amazing crowd and not a very cookie-cutter experience when they get there. 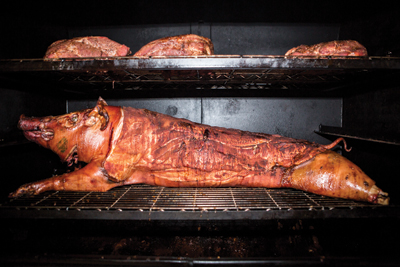 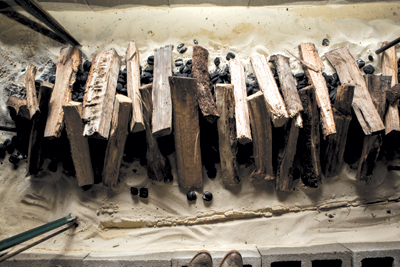 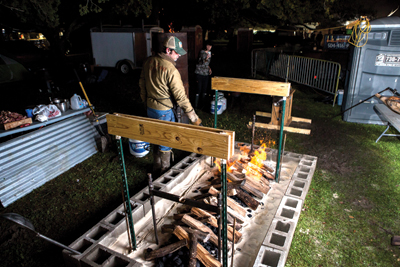 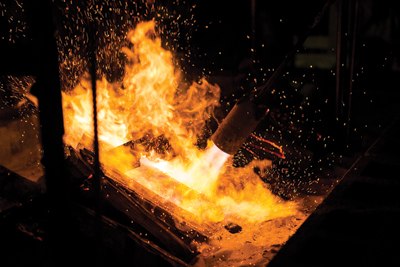 Biz: Given the crowded festival landscape in New Orleans and beyond, how does Hogs set itself apart?

Louapre: Barbecue is huge now everywhere, so that’s one thing. I think we’ve done a very good job of cultivating beverage sponsors — whether it’s NOLA [Brewing Company] or Cathead Vodka out of Mississippi or Rougaroux rum — that are local and trying to get into the market and serving really great drinks. It probably would have been easier to just sell the cheapest beer we can get for the most amount of money. But we decided to find great beer and sell it and cultivate relationships with other local and regional companies that were starting out, like us.

Hall: When we started this eight years ago, there were only a couple of barbecue restaurants in the city. You have Louisiana that’s so rich in cochon de lait and boucherie history, but New Orleans was kind of dead weight when it came to smoked meats. Once we got a couple of years in, we saw what it could be and incrementally built from there.

Biz: What role does the local business community play in terms of sponsorship and support?

Hall: In the beginning it was everything because we were just so local, and we wanted to give that experience. So we would turn down more of a corporate sponsor that would come in and give you a commodity beverage or whatnot because that wasn’t the feel we wanted for the festival. Now, we’ve got national sponsors, regional sponsors, and then Children’s Hospital presents the festival cook-off. That’s a local entity that is a major partnership for us. So sure, we are chasing down national sponsors, but the local ones are just as important to the success of the festival. 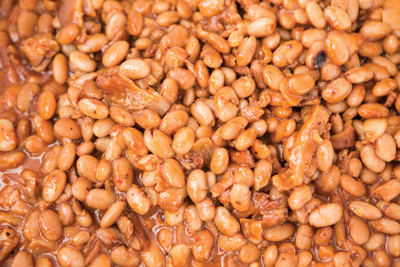 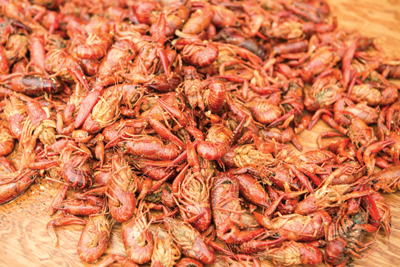 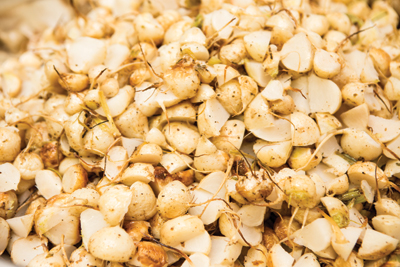 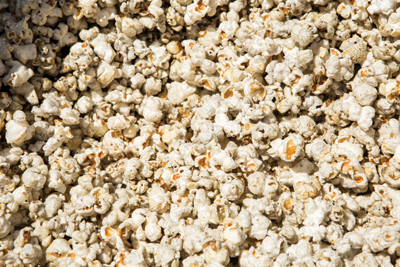 Louapre: We look at the checks that come in from law firms, engineering firms, construction firms — it’s amazing how many businesses are represented because someone who works there is on a team, or they do business with someone on a team. We’ve built kind of a network of 97 fundraisers.

Hall: They’re free marketing. They do the fundraising for us. They put the product out for us. It’s really nice to have these ambassadors to the event so that all we have to do to ensure success (outside of weather) is take care of our teams who take care of us. We’re also fortunate that New Orleans has all of the pieces that add up for this model to work. We have this massive plot of land in the middle of the city and a culture that really identifies with this kind of experience. There are a lot of variables, and you can’t exactly pick up and move to any city in the United States and make it work.

Biz: Are there any plans to expand to other cities?

Louapre: We did [a Hogs event] in Charleston two years ago, and it went pretty well. Then we had one slated there for this fall, but [Hurricane Joaquin] knocked us out.

Hall: We look to expand into other cities, but getting all the variables to line up is very hard. Right now we’re crossing off more cities than we’re checking off.

Biz: How do you manage this with a skeleton crew [and “day job” – Louapre is an attorney]?

Hall: It’s very hard, but with the donation strategy that we have, 501(c)(3)s can’t really grow organically. You can’t really raise any equity. I guess we could partner with one of the big outfits we talked about previously, but we don’t want to do that at this time. 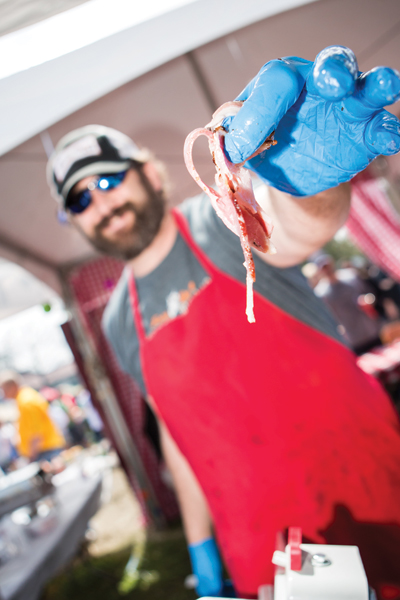 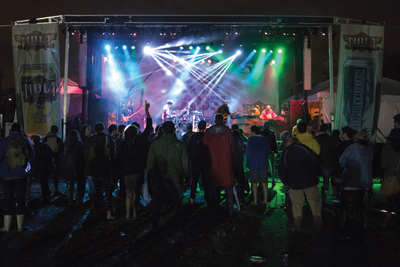 Louapre: We’ve been lucky to have a lot of really great volunteers who’ve said, ‘I’ll handle this, I’ll handle judging, I’ll handle the dinner,’ which makes it easier through delegation. We’re getting better, but still we like to be involved in every decision. Until last year we had no place of business. We stored things in my house, his basement, and Becker worked out of his bedroom. I don’t have many hobbies — this is what I do in my free time.

Hall: And I just can’t sit still. I’m one of those maniacal people. If I’m not being productive, I feel guilty, so it works for me.

Biz: What is the actual event like for you?

Hall: We don’t have the luxury of just glad-handing the whole time we’re there. You’ll look at us and think, ‘Who are those dirty disgusting individuals hauling trash cans through the yard?’ That’s us. And we still do all the calculations of the awards, so we’re back there with our spreadsheet — that’s just how ‘micro’ this thing is run.

Louapre: On Saturday evening, we go out onstage and start passing out awards and having fun. When Sunday comes, it’s sort of like Sunday morning at a bachelor party — no one really wants to make eye contact. So everyone’s filtering out and someone’s like ‘Yeah, someone dumped a bunch of lard in front of our plot. I don’t know who’s gonna clean it — see y’all next year!’

Hall: It’s like any business — there are a lot of challenges. People think, ‘It’s a music/food festival — it’s got to be the most fun and easy job!’ But it’s extremely difficult in today’s environment to do it successfully. There are thousands of moving parts that need to be addressed. One festival definitely takes 10 months of hyper-myopic planning. From every square foot of that yard, to every dollar that’s going into this event, to every single dollar getting accounted for since we’re also a 501(c)(3) not letting one penny slide to the left or to the right. If it looks easy, then we’ve done our job.