A New Voice in the Fight

Is the film industry a good idea for Louisiana? A Tulane professor weighs in with her new book.

First, I have to say that I am writing this column on May 12, and as of this date, there is no news on Sen. JP Morrell’s measure to alter the amount and method in which film credits are allocated in Louisiana.

As that situation stands in limbo, there is a bit of a war going on between The Advocate and the Louisiana Film and Entertainment Association (LFEA). On May 7, The Advocate published its view that the film tax program is “still a giant waste of money,” citing the oft-repeated stat that the state receives a return of 22 cents on every dollar spent on the program.

Just two days later the LFEA fired back, stating that “the economic impact where films are shot brings a 4 to 1 return,” and that the industry “supports 14,000 jobs, $2.5 billion in new sales for Louisiana firms and $1.8 billion in new household earnings for residents over the past two years.”

Both, at least, seem to look positively toward Morrell’s changes, with The Advocate saying that at least we’d lose less money by capping credits further to $150 million a year and $20 million on any one project, and the LFEA happy with the idea of creating some stability and increasing “the return on investment to the state as a whole.”

So, the battle continues, and now a new voice has arrived to weigh in on the scene — Vicki Mayer, a professor of communication at Tulane University. On Lundi Gras of this year, Mayer released her new book, “Almost Hollywood, Nearly New Orleans: The lure of the local film economy.” The book is available both as a physical book and as an open-access monograph, meaning you can read it online for free.

The book is definitely worth a read. It begins with a fascinating look into the history of filming in the state, which began in the early 1900s, all the way up to how the post-Katrina landscape emphasized the need to bring in new industry. The film industry, however, was not the best choice, she says.

“We should have focused on an industry that is not so mobile,” she argues. “Right now there are more than 30 states and several countries that are competing for film, and the industry will go wherever they’ll get the best deal.”

She cites the fact that we are not the first “Hollywood South” — a title that now belongs to Georgia; Texas, Florida, Australia and Cape Town, South Africa, have all also enjoyed their time at the top of the pedestal.

“If we’re going to choose an industry to subsidize, it should be one where we have some kind of competitive advantage,” she adds.

Mayer also argues that the tax incentives tend to favor the wealthy and “steal services from the poor.”

“The bottom line is that we need more transparency,” she says. “These credits are being given to wealthy people out of state, and then they are sold to wealthy people in state.” She says she tried for three years to buy a tax credit and couldn’t. “If they’re out there floating around, why couldn’t I buy one?”

The heart of the book lies in Mayer’s views that the film industry works as a sort of reverse Robin Hood, stealing both money and services from those at the bottom — citing as one example the industry’s extensive use of our police force, and as another the fact that when filming occurs on a residential street, “the city receives money, but the residents who live on that street, who are inconvenienced, do not.”

“With this book I looked at the impact the film industry has on everyday people who live here,” she says. “Of course there are going to be those small business owners that benefit, but with the money we pay out….well, we have to think about how many cuts to public programs like education and healthcare to pay for it can we withstand?” 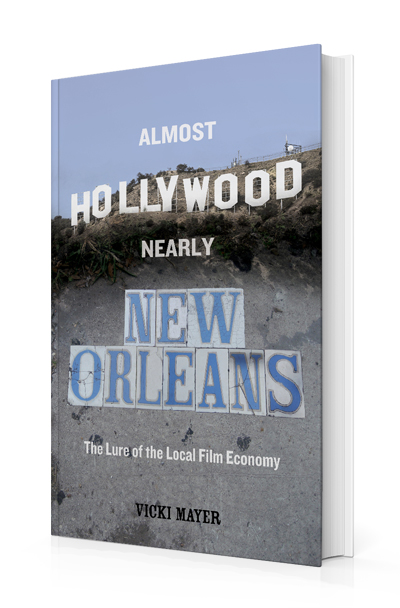 Regardless of how you stand on the issue, the book does make for an interesting and quick read. I encourage you to take a look — it’s worth having to copy this into your browser: luminosoa.org/site/books/10.1525/luminos.25