A New Blueprint for Growth

Jerry Bologna, executive director of JEDCO, discusses how Jefferson EDGE 2020 will herald the parish’s next wave of economic development.

The Jefferson Parish Economic Development Commission (JEDCO) has spent nearly three decades helping attract and develop businesses in the region, with much of that work based on a series of strategic plans called the Jefferson EDGE. Over the past 15 years, Jefferson EDGE has served as a roadmap for the area’s development — a shared vision responsible for, among other things, the development of the 500-acre Churchill Technology & Business Park in Avondale.

With most of its previous goals achieved, the newest iteration of the plan, Jefferson EDGE 2020, has just been released. JEDCO’s Executive Director, Jerry Bologna, shares what he considers to be the area’s most exciting economic opportunities under the plan and what it will take to capture them.

BIZ: Tell us a bit about the evolution of Jefferson EDGE and its impact to date.

Jerry Bologna: The Jefferson EDGE strategic planning process started back in 1999. The original EDGE plan was adopted by the Parish Council in 2000 as a five-year economic development strategic plan for the parish, but some of the things that came out of that original plan include land development, especially here on the Westbank. So we certainly have our park, Churchill Technology & Business Park, to point to as a success.

We have updated that plan about every five years. Some of the most tangible successes coming out of the Jefferson EDGE include the beautification efforts throughout the parish, the real strategic focus on our public education system in Jefferson, and the redevelopment of Fat City. There were no shortage of other plans to look at the redevelopment of Fat City, but I think Jefferson EDGE really brought focus and helped marshal the resources and bring the appropriate parties together.

JB: One reason we arrived at those five is that they tend to be traded clusters — meaning they bring in outside dollars or produce products that are sold outside of the market. So it’s not just a recirculation of the dollars in our community, but something that brings new dollars in. Some of them are clusters where we already enjoy pretty good success but still have a lot of room for growth, and some are totally new ventures for us.

For example, the water, coastal and environmental industries — that is a burgeoning area where we think we will see our greatest growth over the next 15 years. A lot of that is attributed to the coastal restoration effort, the BP dollars that will flow through to our community from the RESTORE Act. On the other end of the spectrum, you have industries like food, beverage, fishing and seafood — that’s an industry that we’ve always enjoyed success with but where we see great growth potential. New Orleans has always been known for its cuisine, but Jefferson has always had a stronghold on the food-manufacturing side. And we can point to major international brands like Zatarain’s and Paul Prudhomme Magic Seasoning Blends as companies that have great success here in Jefferson. But we also have startups that show great potential, like The Jambalaya Girl and Cook Me Somethin’ Mister, so we’re attempting to grow that industry by bringing more of our entrepreneurial ventures to market.

We also chose our clusters taking into account what the New Orleans Business Alliance was focusing on, so we picked up on some clusters where they might be weak and didn’t choose others we feel they are better suited to handle. So there is cooperation on that front. 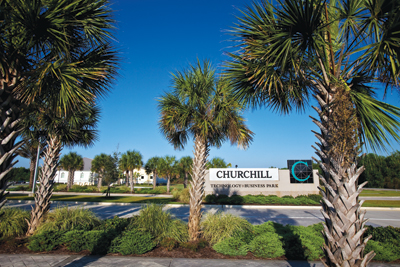 Counted among the successes of past EDGE plans is the 500-acre Churchill Technology & Business Park in Avondale.

BIZ: What makes you optimistic that these goals are achievable?

JB: On food and beverage, we already are seeing successes, so we feel very confident that that’s going to continue.

For the coastal restoration efforts, we intend to put some of the practices that we learned through Hurricane Katrina into practice, and we feel confident about opportunities to get our local firms involved in that process.

On the health care and destination health care side, we have already seen successes, and now with the hospital corridor coming online in New Orleans, there’s even more focus on that industry and more possibilities to attract people to this region for health care. So in some of those industries, we are already seeing signs of growth — our role is going to be to help augment that and push it along.

BIZ: What are some of the biggest challenges facing business expansion and development in Jefferson today?

JB: I think a couple of the challenges are going to include addressing our building stock in Jefferson. That goes for both our commercial building stock as well as our housing stock and our ability to attract the workforce into Jefferson Parish. We enjoy the largest population in the region, but we need to make sure we give people a reason to continue to choose Jefferson as their home.

Workforce development is going to continue to be a challenge. There is so much synergy in this area and growth on the job front — we need to make sure we continue to train our people to be able to fill those positions. We enjoy a close relationship with Delgado. They plan to construct both their River City campus and their Advanced Manufacturing Center of Excellence out here in the Churchill Park. We think those will go a long way in satisfying some of the workforce needs, mainly the maritime related trades and the advanced manufacturing trades, which is where we see so much of our job growth. The state of Louisiana has over $30 billion worth of industrial projects up and down the river and all throughout the southern part of the state announced, so it’s imperative that we provide that type of training to fill those jobs. That’s why we thought it was so important to foster that relationship with Delgado.

BIZ: Is JEDCO looking to attract small-scale entrepreneurs as well as established corporations?

Jefferson is largely a community of small businesses. While we do have those major businesses, the vast majority of our businesses are the small 5-10 person companies. And our focus with those businesses is to not only retain them but to help them see their growth potential here in Jefferson. So our role is to bring the resources and tools to help them grow their businesses here, whether that’s financing, tax incentives, or site selection – whatever it may be.

BIZ: For businesses choosing a location, what makes Jefferson a top pick?

JB: I think when businesses choose Jefferson, they see a very proactive business climate, a proactive government that is helpful to business. They find a trained, highly skilled workforce. The taxes and insurances are low, and the crime rate is low. Those are certainly advantages. 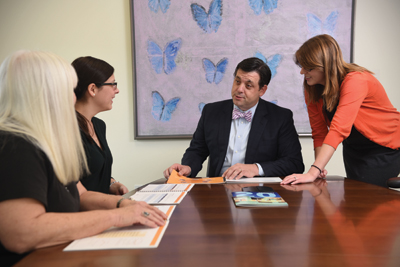 BIZ: What do you consider keys to the success and longevity of Jefferson EDGE?

JB: One thing that has helped us successfully carry out this plan in the past is that we’ve always carried an implementation matrix through the five years. For all the implementation items and action items that come out of this plan, we actually develop a scorecard. We have it monitored by a third party – it’s not just us – and that way, we can gauge our successes and see what we’ve accomplished and where we still need work. That’s what we will be doing again with this plan, constantly monitoring it so it doesn’t become a plan that sits on the shelf in someone’s office. It’s a living document, and we had it adopted by the Parish Council, so it becomes the official strategic plan of the parish.

We also had over 150 stakeholders participate in the planning process. That included groups of business leaders from various industries, elected officials from throughout the parish and the civic community. All of them participated so that we were able to achieve widespread buy-in and input in the plan. I think it’s important in a parish as diverse as ours to get as much input as possible.

BIZ: What would success look like for Jefferson in 2020?

JB: In five years, I would hope we’re seeing successes in those clusters that we point to – job creation, wealth creation, and increased tax revenues for the parish. Specifically, we’d love to be able to point back to a successful adaptive reuse of the Avondale shipyard, and the development of the Fairfield area on the Westbank. I think that’s going to be a focus and a potential success to say we are able to attract first-class developments to the Fairfield area, and that Jefferson Parish is seeing a resurgence in people finding an attractive community in which to live and raise their families.

A Peek at the Plan

Just a few of the priorities established for Jefferson Parish under JeffersonEDGE 2020 include:

• Create an “Advanced Manufacturing Center of Excellence” at Delgado’s Avondale Campus by renovating and expanding the campus’ existing facility to be used for workforce development, along with the renovation and expansion of Delgado’s Blair Campus;

• Planning and development of the Fairfield area on the Westbank of the Mississippi River of Jefferson Parish;

• Reuse/redevelop industrial corridors, including the Harvey Canal, Huntington-Ingalls Shipyard and in Old Jefferson;

• Infrastructure improvement to allow for the phase II expansion of the Churchill Technology & Business Park, and the creation of Delgado’s River City Campus within the park;

• Development of Laketown, to include mixed-use developments; and

• Improvements to the Westwego Riverboat Landing designed to support a riverboat cruise line.

The complete Jefferson EDGE 2020 plan is available at Jedco.org.