Sometimes you choose a career; sometimes a career chooses you. The latter is decidedly the case with Herl Young, aka The Lawnmower Man.

Back in the halcyon days of big oil, Young ran a successful residential construction business. He specialized in the renovation and restoration of houses in the toney Garden District. Then in the ’80s, when oil took a major dip, so did Young’s business.

“Even my best clients were saying, ‘I’m scared to do anything right now,’” he says. “My business dried up overnight.”

Young’s wife, whom he met at the 1984 Louisiana World Exposition, suggested he start another business, but Young wasn’t sure what that could be.

At one point, Young found himself in need of a riding lawn mower so he visited an older gentleman who had a used one for sale. The man had a lawnmower repair business behind his house and it looked pretty successful.

“I started talking to him about his business and before I left he’d suggested I start my own repair business,” Young says. “Two weeks later my back yard was full of lawn mowers needing to be repaired. I've always been mechanically inclined, just like my grandfather, and I like working on small motors so it just seemed to fit.”

He’s now been the Lawnmower Man in Metairie for more than 30 years, fixing blowers and mowers and generators and weed whackers.  He says he couldn’t be happier with his choice.

“I like the independence,” he says. “I get all the profits and I don’t have anyone telling me what to do. Sometimes I have way too much work and other times not too much.  Sometimes I have to support my shop with other income but it’s still worth it.” 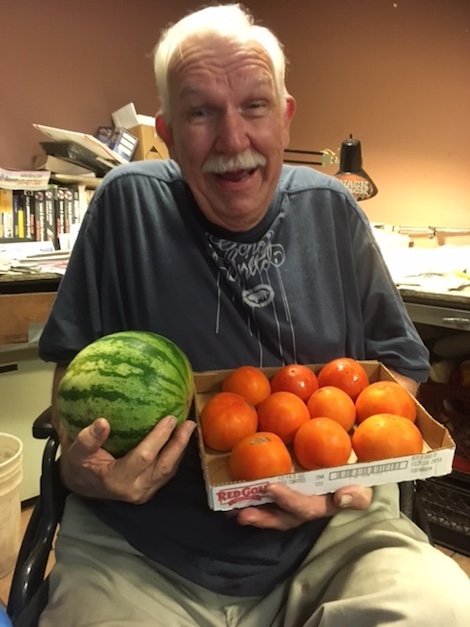 Recently, Young has suffered some medical problems. He says the knowledge that he has his 1,000-square-foot business waiting for him has given him much needed security.

Young has one loyal employee, Co Tran, who’s been with him on and off since he started. It’s quite clear the men are deeply devoted friends.

Young also has two other employees: an apprentice and his grandson. It’s a tight knit crew.

Young says the biggest and most consistent problem they see is damage caused by neglect.

“People use old fuel that was just sitting in the can since last year and now it’s full of moisture,” he says. “I tell people to buy the right gas and try not to hit that pipe in your yard.  Rocks catching blades will knock out the timing. It’s like driving a Cadillac into a brick wall. Be fastidious and always check the oil and you won’t have to come see me.”

He also highly recommends buying the best equipment you can afford.

“If it’s cheap it’ll cost more to fix it than to buy a new one. I have an Echo weed eater. I’ve had it for nine years and haven’t even had to put a spark plug in it.  Get the best bang for your buck.”

All of Young’s work is guaranteed and comes with the best warranty there is: if there’s a problem, bring it back and he’ll make it right.

His customers are loyal and generous. Today he received a gift from a grateful client, a boxful of ripe tomatoes and a big juicy watermelon.

As a local businessperson, Young knows it’s all about being there and meeting customer demands, whatever it takes. As he puts money into his old grey cash box he calls out, “If you need anything, just holler.”