A Kid in Entrepreneur’s Clothing

When Southern Californian Billy Blatty went looking for a job during his first year at Tulane University, he knew exactly what he was looking for.

“I’ve always been a night owl and I needed extra money,” he says. “What other industry could an 18-year-old work at night, earn good money and get to try out such a wide variety of roles — short-order cook, doorman, sweeper, bar-back, bartender? For me the bar business ticked all my boxes.”

Starting out at Fat Harry’s, Blatty continued to tick boxes, working at venues including the House of Blues, 735 Nightclub and Bar, and Whiskey Blue (the latter two are now closed). Soon he had played every role possible, except for owner.

While working as a manager at the Whiskey Blue, inside the former W Hotel, Blatty was offered a rare opportunity — a 10 percent equity position along with a salaried position as the GM and promoter at a new club being built on Tulane Avenue at the turn of the millenium.“The majority owners had different visions of what Ampersand was supposed to be and we couldn’t agree,” he says. “So I was able to come in and buy it out 100 percent for basically pennies on the dollar six months after it opened, but I really had to work my ass off to make it sustainable.”

Blatty did make it work, making Ampersand the place to party in New Orleans’ post-Katrina landscape. Capitalizing on the club’s success, his next move was to bring his own original bar concept to life with Barcadia.

Mixing cocktails with oversized games and classic arcade options to create a kind of adults-only playground, Barcadia opened to great success in Dallas in 2007. It was followed by openings in Fort Worth in 2010, New Orleans in 2013 and Baton Rouge in 2015. Next up, says Blatty, is Nashville, which is expected to open sometime in the next 18 months.

On the heels of Tales from the Cocktail, Biz New Orleans took some time to chat with Blatty about his adventures in New Orleans nightlife, his personal business philosophies, and what he sees for the future of the city that made him fall in love with the night. 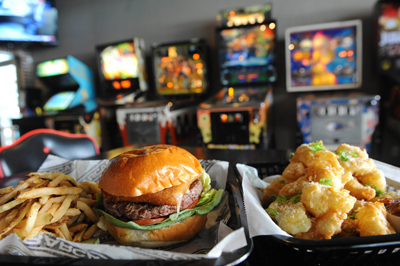 The New Orleans Barcadia location boasts a strong culinary focus. Everything is made from scratch. “We make our own dressing, bake our own bread and grind our own meat,” says Blatty.

Biz New Orleans: When you first took over Ampersand in April 2001, what was your idea/vision?
Billy Blatty: I wanted to create an environment that was difficult to replicate and do something nobody else was doing. I have to say, we barely made it those first few years. I was putting fliers on cars to advertise and bartending to pay my bills. If I ever made a dollar it went right back into the business. Every penny. Poetry nights and comedy shows helped fill the weekday rotation of events.

At that time, electric music was really only heard publicly at raves or nightclubs in big markets like Miami, New York and Los Angeles. I introduced that sound to the local club scene and hired international DJs to play the guest slots. From 10 p.m. to 2 a.m. we pushed the international electronic music scene, and then from 2 a.m. to 6 a.m., I brought in local DJs which played underground localized house music. We were able to score a few phenomenal DJs from Baton Rouge and Lafayette that put out a CD called “Live at Ampersand,” and things really kicked off from there. We really made ourselves THE destination during that post-2 a.m. time slot.

Biz: How did you keep things fresh?
BB: Every couple of years I would totally reinvent the space. Nothing was ever stagnant. That’s really important, I think. I was also lucky with my staff. We were a big family. The same people worked there for years.

Biz: How did you fare during Katrina?
BB: We definitely had damage — four feet of it to be exact. I housed about 14 or 15 staff members at my house and together we worked hard to get back open — ripping up sheetrock, spraying antifungal solution in hazmat suits. But on Halloween weekend we reopened. I think we were basically the first nightclub to get back open, and we definitely benefited. The reopening was a smashing success. Locals had their Katrina checks and contractors were making money and looking for somewhere to spend it. Plus everyone was bored to death and looking for a release.

Biz: What happened to Ampersand?
BB: I brought in a partner in about 2011. Ultimately, the club closed in 2014 when Goodwill of America purchased the building and had other plans for the space.

Biz: You had already moved on by then and were having success with Barcadia. What was the thought behind that concept?
BB: Again, I wanted to create something with a real long-term value — something that represents what I find appealing, which is a place that celebrates simplicity, nostalgia and a sense of fun and innocence.

Biz: So you decided to mix drinking and games?
BB: Yes, Barcadia was really a pioneer in the giant-sized games you see now, like our 5-foot-tall Connect Four game and our Jenga that uses two-by-fours. Plus we have vintage arcade games and Skee-Ball. It’s meant to be a place where adults can come and unwind and feel like a kid again. There’s no dress code, no cover, and all pets — including gators — are welcome.

Biz: You’ve happily made your home base here in New Orleans; why did you go to Dallas to open the first Barcadia?
BB: I actually meant to open in New Orleans, but then Katrina came and wrecked those plans. I had produced club shows and concerts in Dallas with my separate production company, Ampersand Events, and a good opportunity just came up there. I ended up buying and building out an old Laundromat in this crappy part of town for $450,000. We opened in the summer of 2007. Barcadia was a hit and more people started moving into that area and we knew we could maintain stability.

Biz: Forth Worth was next to get a Barcadia in 2010 and then New Orleans finally followed in 2013. How was that process?
BB: Not easy. I never stopped looking at locations in New Orleans, even while I was working on Dallas. I looked at a myriad of locations, including where Walk-Ons is now, and a spot next to Republic. I would get so close, but it never happened. Finally we signed a lease at our location in 2011. It was worth it. I couldn’t be happier.

Biz: With the location in Baton Rouge too that opened last year, are all the locations the same?
BB: No, they all have their own strengths. For New Orleans, we focused on the culinary side of the business to create longevity in to the business plan. Everything is made from scratch — there’s none of the frozen stuff you’ll see other places. We make our own dressing, bake our own bread, grind out own meat. We’re not just a bar, we’re a full-service restaurant from 11 a.m. to midnight.

Biz: You also have the Ohm Lounge.
BB: Yes, the original ran from 2008 to 2011, and then I reopened it in the back of Barcadia. Ohm is a contemporary, Asian-themed lounge with decor derived from Japanese and Chines influences. It was once a restaurant and lounge, but now it’s just a lounge, although we’ve been hosting some pop-up sushi events there that I’m uber excited about.

Biz: Your latest venture is Belle’s Diner. How did that come about?
BB: That was actually through one of the investors in Barcadia, a man named Rick El Jaouhari. He’s actually my landlord for Belle’s. He called me and said he had a property that was the Magnolia Grill and he didn’t know what to do with it, so he asked me to come look at it for a new concept. Upon viewing the space, I saw “diner,” and then the wistful part of me envisioned it adorned with bomber girls on their respective planes from WW2. Combine all that with scratch-made breakfast and lunch all day, comfort food and our take on New Orleans favorite cuisines — you find Belle’s. Plus, we do these hand-spun milkshakes with alcohol that we call “Boozie’s,” that just fly out the door.

Biz: I know you’re less than a year in, but how has business been?
BB: Very good. We’re in a real touristy area — bordering the French Market — so that helps. Although, the audience I’m trying to target are the locals. I’d love the diner to be filled with familiar faces on a daily basis. Cliche, right?

Biz: What have you found to be the biggest challenge in your industry?
BB: I’d say retaining top talent and avoiding complacency. Anytime you have really great talent there are always those with bigger pockets pining to lure them away.

Biz: What would you say have been the secrets behind your continued success?
BB: Consistency. Team. You can never be passive in this industry as an owner. I’m handling every check approval, tasting every menu item, etc. There’s just so much competition out there right now that you can’t afford not to know your own business inside and out.

Really, though, I think a lot of it has just been about being there when the opportunity hit. It’s been said, “I’d rather be lucky than talented,” and I back that 100 percent.

Biz: How do you decide on the next project?
BB: So much is about location. Besides the Nashville Barcadia coming up, I’m also working on a brick oven pizza joint in the Marigny in maybe the next six or nine months. I don’t want to share too much about it because I’m kind of superstitious when it comes to talking about things before they happen. I love this city and it’s so hot right now. When the right location pops up, you have to have a good concept ready, the team infrastructure to execute, and enough dough left over to operate if things don’t initially go in your favor. I’ve definitely got my radar on at all times. 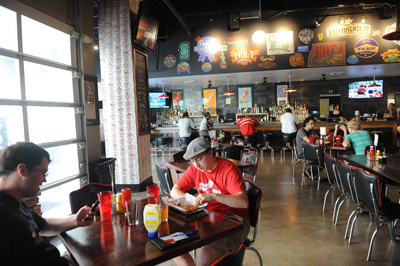 A popular downtown hangout, Barcadia is a kind of adults-only playground that mixes a vintage arcade with a full bar and full-service restaurant. 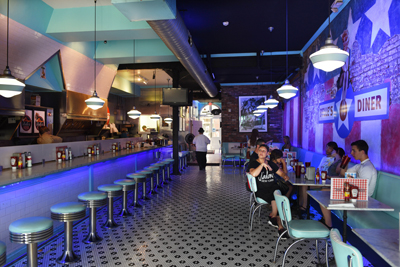