A behind the scenes look at the workspace shared by public relations maven Betsie Gambel and her “Gambel Girls.”

Betsie Gambel’s office is a marvel of efficiency. Located on the second floor of an upscale Metairie Road shopping center, the 10 women of Gambel Communications work computer to computer in just 1,000 square feet.

Even so, Gambel says she’s not looking to expand anytime soon, noting that her firm is operating at full capacity,. “We love the space so much that we are reluctant to move. Besides, because of the nature of our public relations work, we are rarely all in the office at the same time, except for our Monday-morning staff-brainstorming meetings.”

“You must be a team player when you work in tight quarters,” she adds.

The floor plan is divided into three main spaces — a reception/office area, a second office/copy station, and Gambel’s office and conference room. A compact kitchen was added two years the company moved in; Gambel’s father, architect Sellers Meric of the New Orleans architectural firm Cimini and Meric, designed it. “My father also guided me with the furniture selection,” she says. “I grew up in an award-winning house in Lakewood South that my father designed in the 1960s. It was a clutter-free home that really set the tone for my love of neatness. I feel very comfortable in this space, which I consider a work environment that is conducive to productive collaboration.”

What drew her to Metairie Road? “After working 10 years in French Quarter and Central Business District offices, I wanted a convenient location where parking was easily accessible,’ she says. “When I walked into this space for the first time and experienced the light, airy feeling and high ceilings, I immediately knew it was perfect for Gambel Communications. I actually began the company in 2009 from my home just five minutes away, but in less than a month I was looking for a bigger space for my rapidly growing staff.” 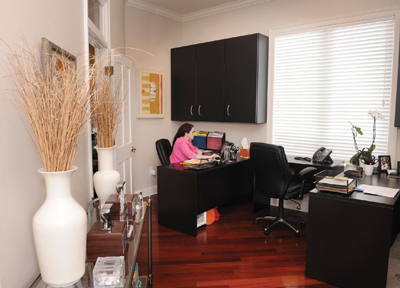 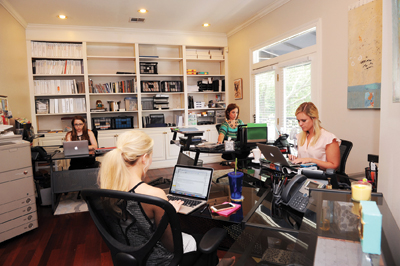 LEFT: Lindsey R. Andry works in the reception area, which features a glass table with many of the awards acquired by the public relations firm. RIGHT: The compact three-room office of Gambel Communications accommodates the staff of 10; including, left to right, Christine Rigamer, Veronica Ridgley, Amy Boyd Collins and Gretchen Hirt.

“We fondly refer to our all-female staff as ‘The Gambel Girls,” Gambel continues. “We don’t think of our office as crowded — rather it is an open work environment that is conducive to ‘group think.’”

This “group think” is constantly called upon for the public relations firm’s prestigious clients, which include such industry heavyweights as the Hotel Monteleone, Preservation Resource Center, the Business Council of New Orleans & the River Region, and the New Orleans Ballet Association.

“The Historic New Orleans Collection is our oldest client, and they feel like a close family member,” Gambel says.

A graduate of Ecole Classique School, where she says she loved the challenging curriculum of four years of Latin and six years of French, Gambel has a degree in sociology from Sweet Briar College and has done graduate work in education and marketing at Tulane University, Loyola University and the University of New Orleans.

The firm’s many accolades and awards garnered over its six-year existence, include Gambel’s personal awards. “The honor I am most proud to display is my 2013 national award for being named the United States Small Business Administration (SBA) Women in Business Champion of the Year,” she says. “I was also honored as the first woman from Louisiana to be inducted into the Southern Public Relations Federation (SPRF) Hall of Fame.”

Gambel was also named the Jefferson Chamber Women Business Champion of the Year and is a Goldman Sachs 10,000 Small Businesses Scholar. “This honor rounded out my business skills and opened many doors for me, including being a Goldman Sachs monthly business blogger for the Huffington Post,” she says. 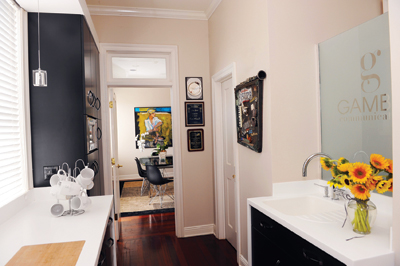 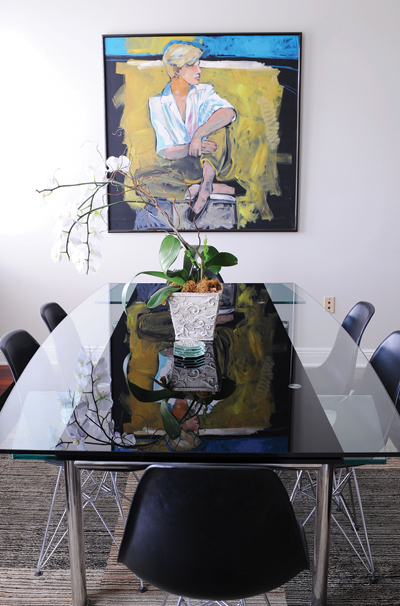 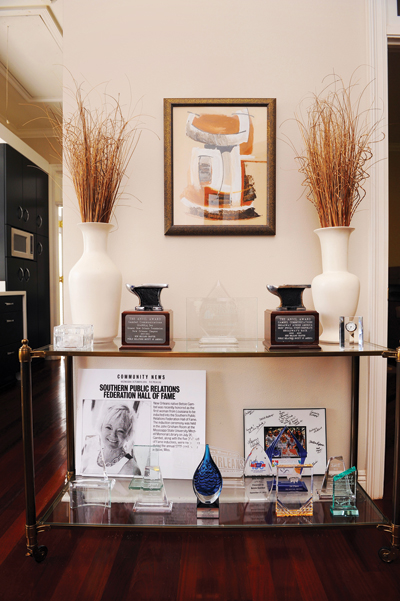 TOP: Gambel’s father, Sellers Meric, a well-known New Orleans architect, designed the small kitchen that was added in the hallway. BOTTOM LEFT:  A painting by New Orleans artist Dr. Rise Ochsner has a place of honor over the glass topped conference table. BOTTOM RIGHT In operation only six years, the firm has garnered multiple awards, including one honoring Gambel as United States Small Business Administration (SBA) Women in Business Champion of the Year in 2013.

Along the way, the public relations purveyor has always found time for community service. ”We recently created a nonprofit division of the company to focus on non-traditional, yet complementary, public relations and marketing services tailored to nonprofits,” she explains. “The cornerstone of our agency is being an integral part of the community we serve. We are involved in many civic and philanthropic organizations at all levels, from leadership positions to ‘boots on the ground.’ My personal service includes serving on the board of directors for the Jefferson Chamber of Commerce, the New Orleans Regional Leadership Institute and the Clarion Herald Advisory Board.”

For Gambel, staying productive while working within space constraints necessarily involves making a strong effort to tackle office clutter. “We have made great inroads in a paperless transition to fewer file cabinets — almost everything is electronically saved,” she says.

Even the “news line” display on the stairway when you first enter the building is kept edited with neatness in mind.

“Our news line is an interesting introduction to our work,” she says. “It’s a wall that features coverage we have received for our clients or events we have been a part of — from the recent Give NOLA Day and New Orleans Ballet Association’s features, to the program for the You Night fundraiser where I was the honored speaker. We even have the ‘Bodacious Bra,’ based on ‘Guys and Dolls,’ which we contributed to FestiGals last year. We loved it so much, we were the high bidder at the auction so it could have a permanent place on the news line wall.”

There is one place the no clutter rule does not apply, and that is the space Gambel has allotted for family photographs. She keeps photos of her two sons — Gregory and his wife, Krista, and their 8-year-old twins, Collin and William, who live in Philadelphia, and her younger son, Meric, and his wife, Page, and their 1-year-old daughter, Emily, who live in Greenville, South Carolina, just behind her desk. “I cherish my family photos and they have a special place of honor near me,” Gambel says.