A Community of Warriors

Bastion Community of Resilience in Gentilly is providing veterans with neighborhood. 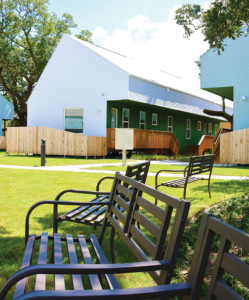 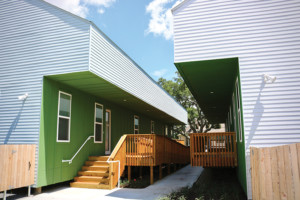 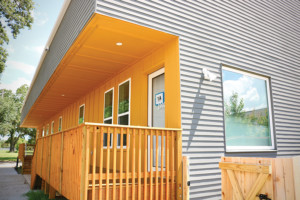 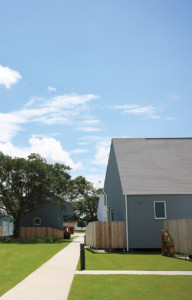 Dylan Tête, executive director and founder of Bastion Community of Resilience, with the help and guidance of others, continues to make a difference in our community and the lives of our returning soldiers.

Tête spearheaded an effort to build an intentionally designed community to serve veterans with combat experience in Iraq and Afghanistan. The result was Bastion Community of Resilience, (1901 Mirabeau Ave. in New Orleans) which gives veterans an opportunity to join a neighborhood where they find purpose, healing and the chance to continue their commitment to serve.

“I had a sense of loss when I came home,” said Tête, an Iraq veteran. “When you’ve been in an environment where you depend on the person to the left and to the right of you, it’s hard to return to a place where you no longer have that innermost circle of trust. I had to battle demons when I came back. It took me at least 10 years to come home all the way. We wanted to build a community that offered meaningful relationships and support to the warriors to help them recover from the wounds and casualties of war. ”

Phase 1 of the $15.9 million construction on Bastion’s 5.5 acres currently houses 76 residents in 38 residential units along with a wellness center and several common areas. Architect Jonathan Tate designed this phase, which offers one-, two- and three-bedroom models.

Seventy percent of the apartments are dedicated to affordable housing and 30 percent rent at market rates.
Phase 2, a $4.7 million project, is underway with the plan to add 20 more units that will be geared toward veterans who need more support.

Injured veterans live alongside retired military and civilian volunteers, the idea being that veterans and families benefit from a network of friends and neighbors committed to providing lifelong friendship and support.

Tête said the housing model is a paradigm shift as it offers community as instrumental support and care for returning war veterans, rather than only professional clinical services and isolation.

“Transitioning from military to civilian society is challenging for healthy warriors, but for warriors who require total care or a supportive living environment, it’s especially challenging,” he said.

Bastion not only offers veterans affordable housing, it also connects them to a wide variety of services and resources. Residents and their caregivers are offered assistance in developing individualized life plans, as well as the tools to achieve their goals. Programs range from meal preparation and yoga classes to help with negotiating job searches and rides to the grocery.

The community-based solution also relies on a broader community of civilian volunteers, some located in other states.
Bastion’s job placement service is a part of and sponsored by the Houston-based nonprofit, NextOp, which aims to recruit, train and place high-performing middle-enlisted military leaders into Industry careers. Bastion’s residents, as well as New Orleans-area veterans, can take advantage of the job placement service.

Another effort came from a bit further afield — the Red River Foundation, a charitable branch of Red River, a technology transformation company based in New Hampshire. The foundation is dedicated to a wide range of efforts but is committed to issues that face veterans.

Red River organized a volunteer team at Bastion during a recent professional conference in New Orleans. The company provided and installed 45 pallets of sod, built six benches and 27 tables, installed a wireless network, planted 11,000 plants and 24 maple trees and donated $12,000 in computer and office equipment. This was accomplished with 1,500 volunteer hours. In all, the company gave $200,000: $80,000 in cash and the rest in in-kind donations.

“Helping others is part of our company’s DNA,” said Jeff Sessions, Red River’s CEO. “It’s just who we are. When we recruit employees we look for the kind of people who want to give back and who are willing to help others and one another.”

Lauren Bowman, Bastion’s director of fundraising and development, said she’s always thankful for companies that offer help but Red River was in a class of its own. They provided everything from building materials to ice cold bottles of water.

“We didn’t have to do anything,” said Bowman. “They were adamant about that. When we’d ask, ‘What can we do?’ they would say, ‘Just come look at it and give us some feedback.’”

Tête was also impressed and thankful for Red River’s commitment, praising the “200 employees that gave their sweat and hearts to turn a construction site into a community.”

Resident Brandon Darrington said he’s indebted to Bastion for helping him out of the isolation he felt after returning from war.

“Here I am surrounded by people who have mutual experiences and there is camaraderie I couldn’t find elsewhere,” he said. “And it helps us transfer the skills we learned in the military to the civilian life. For the first time I’ve been able to understand my challenges and not feel abnormal because I am around others who know how I feel and it feels like I am not alone.”

Těte said this project is proving its success and will serve as a replicable model for national expansion.

“Whatever challenges confront our community,” he said, “we have the people to solve these challenges and make our country proud for the gift it has bestowed on us once again: each other.”

Bastion resident Brandon Dorrington served in Operation Enduring Freedom, Afghanistan and Operation Iraq Freedom. He was honorably discharged in 2006. Dorrington credits Bastion with helping him to continue to successfully make his transition into civilian life.

“Here we can openly dialogue about our feelings and anxieties,” he said. “For example, for many of us the big Mardi Gras parades made us uncomfortable because of the crowds and the noise, so we joined together and went to smaller parades. “

Dorrington is Bastion’s wellness center coordinator and is employed by Delta Corps, a program that deploys AmeriCorps members to local organizations to help them improve economic opportunity in their communities. He was also a candidate for mayor in the 2017 election, a venture he said he did, not to win, but to give him the chance to talk about important issues.

“Life is full of challenges and it’s so easy to let yourself become isolated,” he said. “Bastion has given me the support to take a leap of faith and try stepping out.”

Implosion Back on for Partially Collapsed Hard Rock Hotel