A $6 Billion Renovation Takes Off At ATL

Amongst those of us who often fly throughout the Southeast, the ol’ insider joke is when you die, whether you go to Heaven or Hell, you’ll have to connect through Atlanta.

I have clocked in a lot of time at the Hartsfield-Jackson Atlanta International Airport (ATL) over the years.

Growing up in New York City, we stopped in Atlanta on our way to and from Captiva Island, FL, for vacations.

When I attended Tulane, and couldn’t get direct flights to and from LaGuardia or Newark, I’d stop in Atlanta.

I eventually moved to New Orleans permanently, but when I worked as an on-air TV reporter in Charleston, SC, a round trip weekend home always involved 4 flights, you guessed it, through Atlanta.

It wasn’t until I was an on-air TV reporter in Atlanta that I actually had the chance to leave the airport and get to know the city.

Last week, at the inaugural State of the Airport event in Atlanta, Atlanta’s Mayor Kasim Reed and ATL’s General Manager Miguel Southwell announced the Atlanta airport is going to get a $6 billion face-lift. The 20-year, multi-billion dollar capital plan includes improvements to the domestic terminal, new gates and new parking structures, the construction of a new concourse, plans for a sixth runway and an expansion of ATL’s cargo area.

“Hartsfield-Jackson International Airport is a global icon in international travel,” Craig Lesser, Atlanta’s World Trade Center Chair, told the Metro Atlanta Chamber. “The Atlanta airport is one of the driving reasons that companies from around the world choose Atlanta as a launching pad for their business and trade activities.”

According to Jeff Martin with the Associated Press, ATL will benefit from:

• Two giant, translucent canopies spanning several lanes of roadway and sidewalks outside the domestic terminal enclosing the drop-off and pickup lanes and connecting the terminal to parking decks

• A $393 million terminal modernization project, updating the interior of the domestic passenger terminal and concourses

There was another big announcement at the State of the Airport address. Southwell said they have decided to reverse their practice of banning ride-sharing services such as Uber and Lyft at the airport, because they found airport customers overwhelmingly wanted them.

Southwell said airport officials will present a plan to the Atlanta City Council on March 30, which means New Orleans travellers could start using their ride sharing apps at both cities’ airports, as soon as July 1. 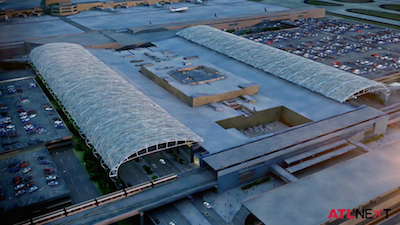 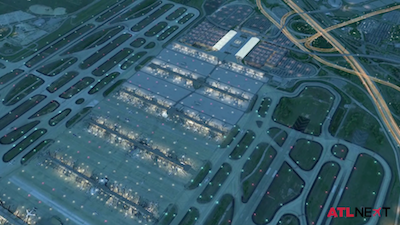