He has been responsible for overseeing all advocacy and operations for the Chamber for almost 10 years, and as such, he has seen the organization evolve into what is now one of the strongest local Chambers in the state.

“Whether local issues at the school board or parish council or legislation in the state house, we are at the table fighting for pro-business initiatives. We are a leader in advocating for business throughout our region.”

Over the past 25 years, the Jefferson Chamber has grown by leaps and bounds. It started with only a handful of business leaders who wanted more than simply a networking organization. That small group then convinced 100 companies to share the vision with a $500 commitment.

“The volunteer advocacy group launched in 1997 and today has a full-time staff of seven and nearly 900 corporate members,” Murphy says. “Likewise, the involvement from members has significantly magnified over the past decade. What began as an idea to bring businesses together to educate and advocate on parochial issues has evolved into one of the region’s and state’s most influential voices.”

The Chamber, which represents businesses in the largest parish in the Greater New Orleans region, has taken several notable public policy and legislative positions, grown its membership and high investor revenue by more than 35 percent, and received a five-star accreditation from the U.S. Chamber of Commerce (joining the ranks of only 119 elite Chambers out of 7,000 Chambers across America). Additionally, the Jefferson Chamber has been honored three times in the past decade as the most outstanding Chamber in the State of Louisiana (large chamber category) by the Louisiana Association of Chamber of Commerce Executives.

What began as an idea to bring businesses together to educate and advocate on parochial issues has evolved into one of the region’s and state’s most influential voices.”

Under Murphy’s leadership, the Chamber has, at times, partnered with the parish council and administration to move on certain issues. The result has been more commercial and residential development, better access to transportation through ride-share apps and increased industrial development and job growth.

In fact, business is booming in Jefferson Parish.

“Our workforce is almost 209,000 strong,” Murphy says. “Our infrastructure is solid. Twenty-four of our schools are rated at a B level grade or above. Almost 67 percent of companies plan to expand this year, and nearly 97 percent expect to have at least the same workforce with no reduction. Almost half of our companies have operated in our parish for at least four decades, and they are still going strong.”

According to Stephen Waguespack, President and CEO of the Louisiana Association of Business & Industry (the lead organization for LACCE, the state association of local chambers of commerce), the Jefferson Chamber understands what is needed to promote jobs and investment in the area.

“They know how to put the right mix of brains and brawn together to make sure the voice of business is heard,” Waguespack says. “The benefit of joining is to ensure the Chamber is working on the issues important to your business plan, as well as the opportunity to network and learn from the experiences of other business owners.”

Waguespack, who leads the state chamber and manufacturing association, representing roughly 2,000 businesses and encouraging economic growth in Louisiana, also says that the Jefferson Chamber has a huge impact on the local community at large.

“For example, the Jefferson Chamber has been a strong proponent of education reform over the years and has been a critical reason Jefferson Parish has been a great role model of implementing strong accountability and proven strategies that work in the classroom,” he says. “The Chamber being present and knowledgeable in this space gives the support needed for the education reform model to take hold, grow and prosper.”

“The Jefferson Chamber and GNO, Inc. collaborate on a number of areas, but especially state public policy,” he says. “For example, in pushing for more early-childhood funding. Also, with the help of the Jefferson Chamber, we are able to pass transformative legislation, like Constitutional Amendment No. 2, that will lower income taxes in Louisiana.”

One of the primary keys to the Chamber’s success has been the ability to accomplish its objectives using three separate but contiguous organizations.

“The Chamber is the voice of business, while the charitable-giving Foundation is clearly the organization that addresses the quality of life, staff development and leadership programs,” Murphy says. “Likewise, without the Political Action Committee, we would not have the campaign voice to ensure the right people are elected to serve business interests. The organization is served well by the existence and coordination of the three organizations.”

While the Jefferson Chamber consists of numerous committees and offers a multitude of events, services and projects—all led by volunteers—there are a few that are especially notable. For instance, the PAC that Murphy mentions is core to the Chamber’s mission. The PAC recruits, endorses and funds candidates who are good for business. Meanwhile, the High Investor program, which is the primary funding source for the Chamber, allows for medium-to-large companies to take a leadership role in the Chamber through sponsorship and involvement. At the same time, it allows smaller companies to connect with leaders of the larger companies in the region.

Through and through, the Jefferson Chamber works tirelessly to improve conditions for local businesses in Jefferson and Louisiana.

“Our future depends on driving systems of change,” Hecht says. “Therefore, it depends on the continued growth, success and impact of the Chamber.”

While the executive staff leadership is changing—the Jefferson Chamber recently welcomed Ruth Lawson as its new president. The Chamber is well-established, and the volunteer base is engaged, consistent and passionate.

“The combination of strong staff support and a dedicated bench of area business leaders will continue to take this organization to new heights,” Murphy says. “We have established a good business acumen within the organization itself, which will serve the Chamber moving forward. Whether in the halls of the Jefferson Parish government buildings, the Jefferson School System, the State Capitol or Congress, it is fair to say that I am stepping away from one of our state’s most relevant, influential and courageous organizations.” 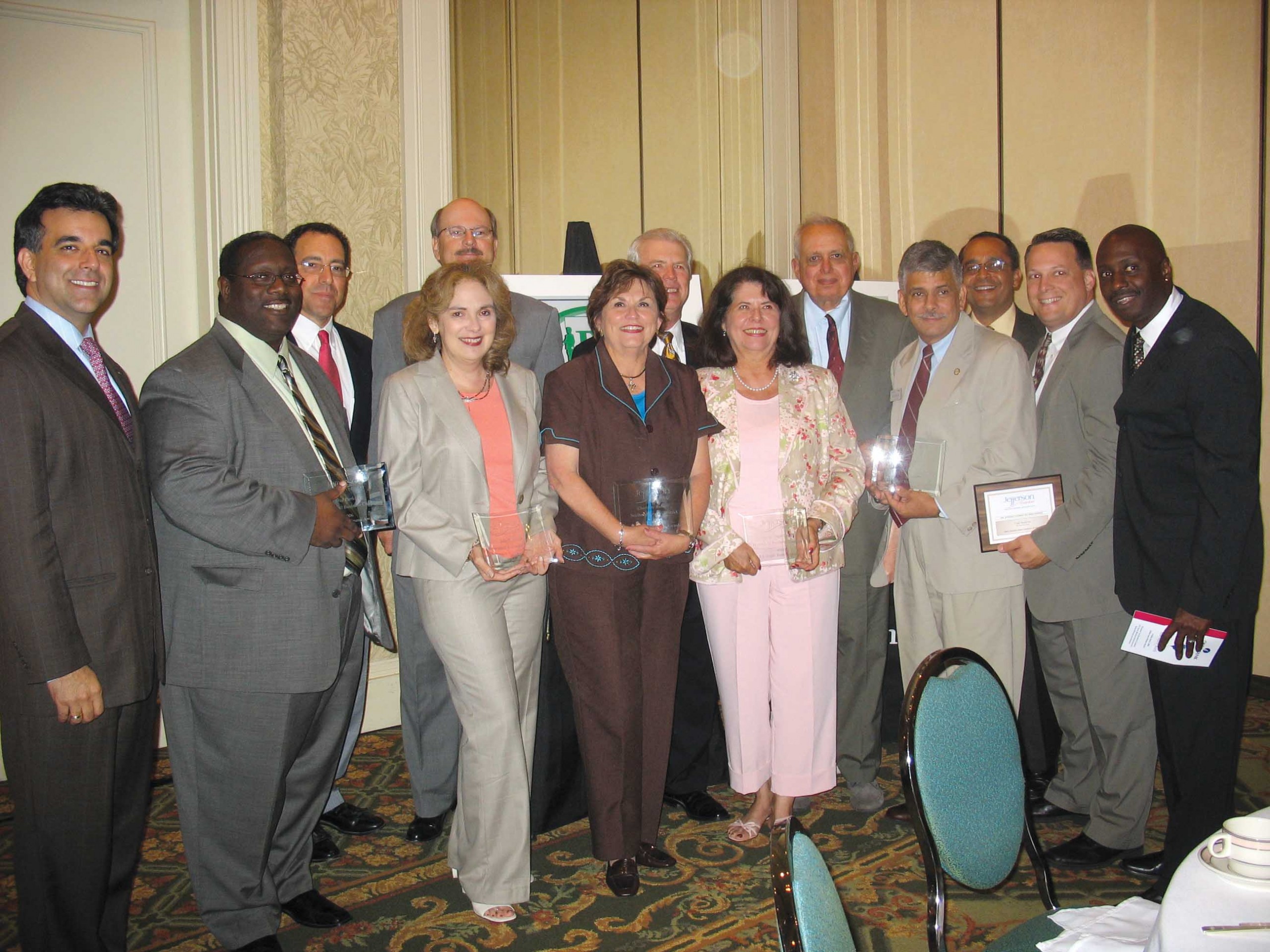 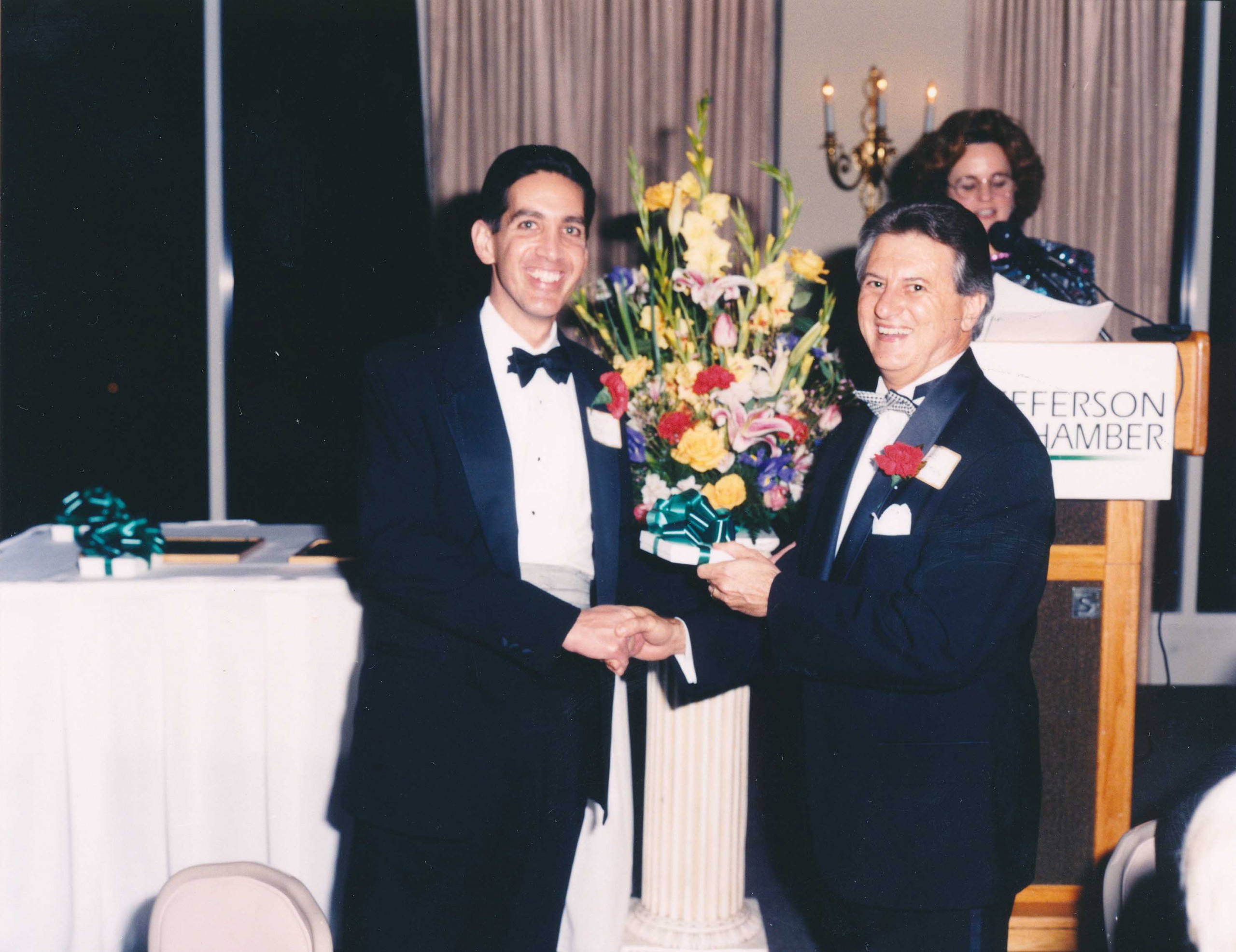 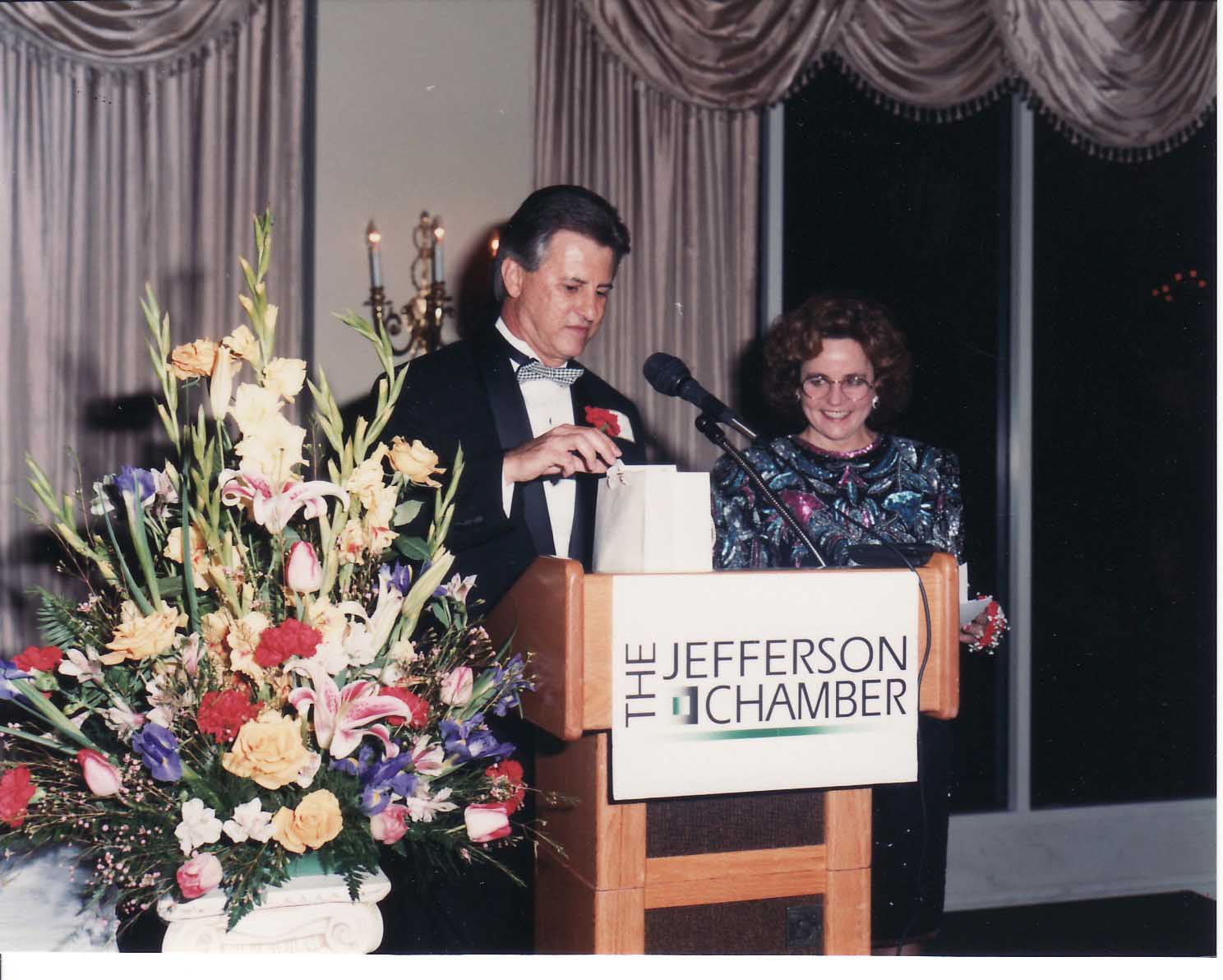 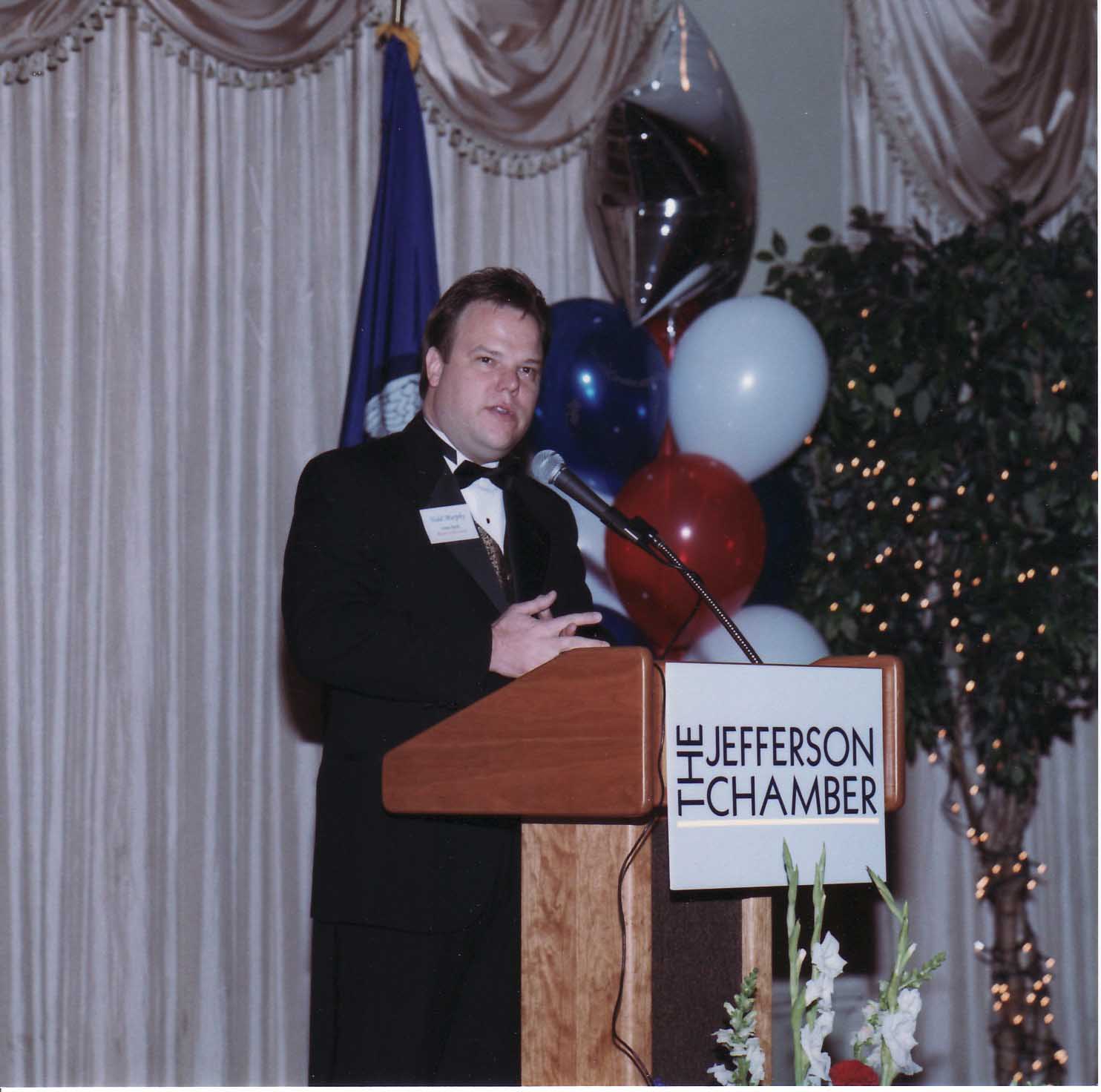